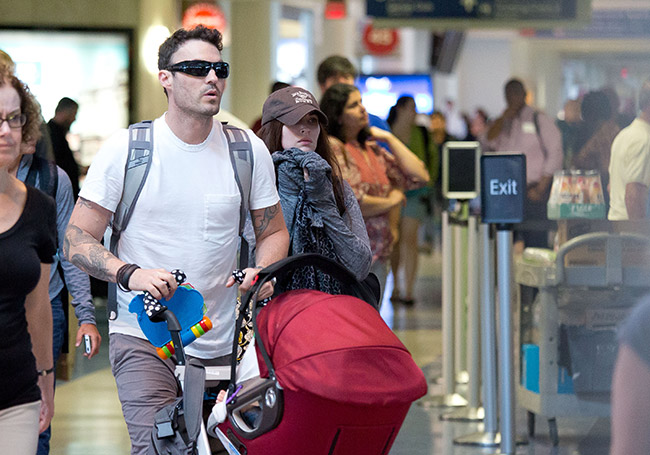 The Transformer star first announced her unexpected pregnancy earlier this year, only 8 months after filing for divorce from her 5 year marriage to Green. Already with boys Noah, 3 and Bohdi, 2; the actress welcomed more testosterone into her house with a third son,  Journey River.

Although Brian had let slip of the sex of the baby prior to birth, the name was under close guard.

With the impending divorce, many fans were questioning who the father was with Megan later confirming it was Brian. She laughed off rumours her Transformer co-star, Shia Lebouf, was the father.

Fox and Green have moved into a Malibu home together and have been spotted looking for preschools in the area. No word yet on the impending divorce.

The 30 year old actress won’t be showing off her little Journey anytime soon, saying she doesn’t allow much screen time for her kids and wants to keep them off social media as much as possible.

Mum-of-four Chrissy Horton discovered this amazing newborn sleep tip she wished she had known it for her other 3 kids. Find out what it is!
END_OF_DOCUMENT_TOKEN_TO_BE_REPLACED

Babies born in October are actually pretty special. They are even more likely to live to be a ripe old age and also be a…
END_OF_DOCUMENT_TOKEN_TO_BE_REPLACED

The World Health Organisation (WHO) has looked at the ways in which the arts can prevent and treat illness across all demographics.
END_OF_DOCUMENT_TOKEN_TO_BE_REPLACED

Fifi Box has returned to work less three months after the birth of her second daughter, Daisy.   View this post on Instagram   Back…
END_OF_DOCUMENT_TOKEN_TO_BE_REPLACED