Previous article
› Why Artificial Sweetener Is Bad For Us
Next article 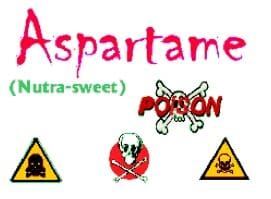 Many health professionals have stated that they believe artificial sweeteners could potentially have dangerous medical side effects.

Although artificial sweeteners are widely used across the world by individuals trying to lose weight and by individuals who have trouble digesting sugar, there is mounting evidence that they could cause a number of harmful side effects – despite being listed as safe for consumption by the FDA.

Yes, but are they really that bad?

Artificial sweetener’s to look out for

The most common artificial sweetener is aspartame, also known by the chemical code 951 and by the brand names NutraSweet and Equal is believed to be a carcinogen if ingested in large quantities. It’s incredibly sweet – a whopping 200 times sweeter than sugar – and it breaks down into some potentially harmful compounds when it is broken down and processed by the body.

When aspartame is ingested, 40% of it becomes aspartate, 50% phenylalanine (this is a type of amino acid that could cause numerous side effects, particularly if you are allergic to it) and 10% methanol. Methanol is a dangerous poison – it’s actually wood alcohol.

Although you might think that you don’t ingest any artificial sweetener, it’s actually found in literally thousands of food products – especially food products that are aimed at the “diet” market, such as diet soft drinks, yoghurts and chewing gum. If you take in too much aspartame, you may experience a number of side effects, such as:

Scientists believe that aspartame could have a hugely negative effect on our children – and this is basically because children’s internal systems are not as strong as an adult’s. Because of this, children can potentially absorb more of the dangerous chemicals within aspartame. This could also lead to a build-up of chemicals within the brain, and some scientists believe that this exposure to chemicals during the early years could cause neurological disorders such as ADD, ADHD and autism. Therefore, we recommend consuming only natural sugars in limited amounts during pregnancy and beyond to limit the number of chemicals that your baby takes in.

Sucralose is another common artificial sweetener, known by the chemical code 955 and by the brand name Splenda. It’s found in over 4500 food and drink products and because it is completely calorie-free, it’s pretty popular. If you eat too much of it, it could cause a number of adverse side effects. However, sucralose is probably the safest of the artificial sweeteners as we only take in about a quarter of it – therefore we only process a quarter of it. The rest comes out as waste.

You might have head the phrase “saccharin sweet”. Well, there’s very good reason for that phrase – saccharin is 300 times sweeter than sugar. But it’s not a particularly healthy product – when it was first discovered, it was actually a derivative of coal tar. 30 years ago, saccharin was banned. It was thought that it caused cancer in humans and animals following a rat study that showed that saccharin caused a number of micro-crystals within the body, that gradually wore away the lining of the bladder.

This damage to the bladder led to cancerous tumours. However, saccharin (also known as Sweet ‘N Low) has been taken off the banned list. Scientists found that we have a different chemical makeup to rats. However, we wouldn’t want to risk it – would you?

Ace K is a shortened version of the rather lengthy name Acesulfame Potassium. This sweetener is 200 times sweeter than sugar but it’s not very pleasant – in fact, it leaves a fairly bitter and unpleasant aftertaste. Ace K was discovered in 1967 and it’s thought that it might be carcinogenic if you consume too much of it. A study done on the effects of Ace K and mice showed that Ace K actually gets into the amniotic fluid and the breast milk. This means that it could get to your baby in the womb, and through your breast milk – and there is some evidence to suggest that this could cause your child to have a sweet tooth in the future.

Where are artificial sweeteners found?

You don’t have to eat artificial sweeteners though – there are alternatives. We recommend natural sweeteners such as stevia or xylitol, or you could also try honey or agave nectar.

The new breakthrough study has identified a biochemical marker that could help detect babies more at risk of SIDS, while they are alive.
END_OF_DOCUMENT_TOKEN_TO_BE_REPLACED

The Cancer Council has released a flyer urging parents to ‘ditch the ham sandwich’ due to the links between processed meats and cancer.
END_OF_DOCUMENT_TOKEN_TO_BE_REPLACED

Coles is recalling packets of baby spinach sold in supermarkets across three states due to potential salmonella contamination.
END_OF_DOCUMENT_TOKEN_TO_BE_REPLACED