Previous article
Health › Australian Couples Having Less Sex Than A Decade Ago – Is Netflix To Blame?
Next article

It seems instead of reaching for our partner in bed, we’re grabbing our phones or indulging in a Netflix binge – and it’s impacting our sex lives. The latest research reveals Aussies are getting down and dirty less times a week than they were ten years ago, and tech addiction could be to blame. 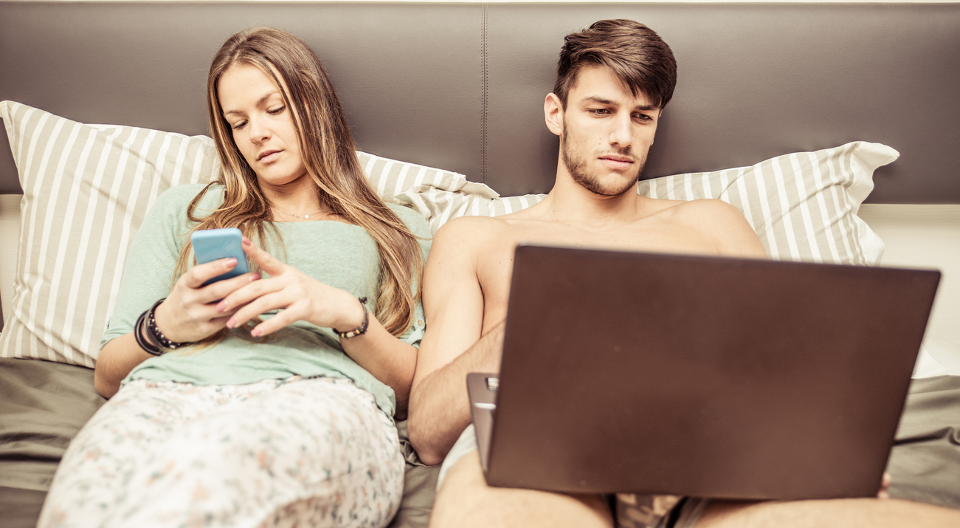 The second Australian Study of Health and Relationships has revealed those of us in a heterosexual relationship are having sex an average of 1.4 times a week, down from 1.8 times in 2003.

The study’s lead author says the decline might have to do with the amount of time we spend on tech – taking our phones and laptops to bed for either pleasure (but NOT for Netflix and chill!) or business, like checking work emails.

“It’s that feeling that you’re always on duty,” Professor of sexual health at UNSW Australia Juliet Richters told The Conversation.

More oral sex on the cards

The survey of more than 20,000 Aussies aged 16 to 69 also found that young couples are having sex more often – an average of 2.1 a week, while those in their 60s were still enjoying sex once a week. Less than two per cent of those surveyed had sex every day.

The stresses of modern life may also be to blame for our waning sex lives, according to UNSW Associate Professor Kath Albury, who cites a lack of energy, employment worries and mortgage stress as big libido killers.

But it seems as a nation we are exploring our sexuality. More men (88 per cent) and women (86 per cent) are now having oral sex.

“Oral sex has stopped being the naughty exotic act that it was for my parents’ generation and has become a socially accepted part of foreplay or mucking about,” said Professor Richters.

In the past year:

To take a look at the full results, head to The Australian Study of Health and Relationships. And to make sure your sex life doesn’t take a nose dive after having kids, take a look at our advice on relationships and sex.

Grab these ten great value foods to give your pantry, and your meals, a quick and nutritious boost! Plus 10 recipes using budget pantry staples.
END_OF_DOCUMENT_TOKEN_TO_BE_REPLACED

The new breakthrough study has identified a biochemical marker that could help detect babies more at risk of SIDS, while they are alive.
END_OF_DOCUMENT_TOKEN_TO_BE_REPLACED

We are so excited Fiona Falkiner’s, The Biggest Loser’s former host, health and body transformation. She is looking so healthy, strong and confident and we…
END_OF_DOCUMENT_TOKEN_TO_BE_REPLACED