Sugar, why are we all scared of it?

Over the last year or so, the diet and healthy eating bandwagon has seriously jumped on the anti-sugar horse. 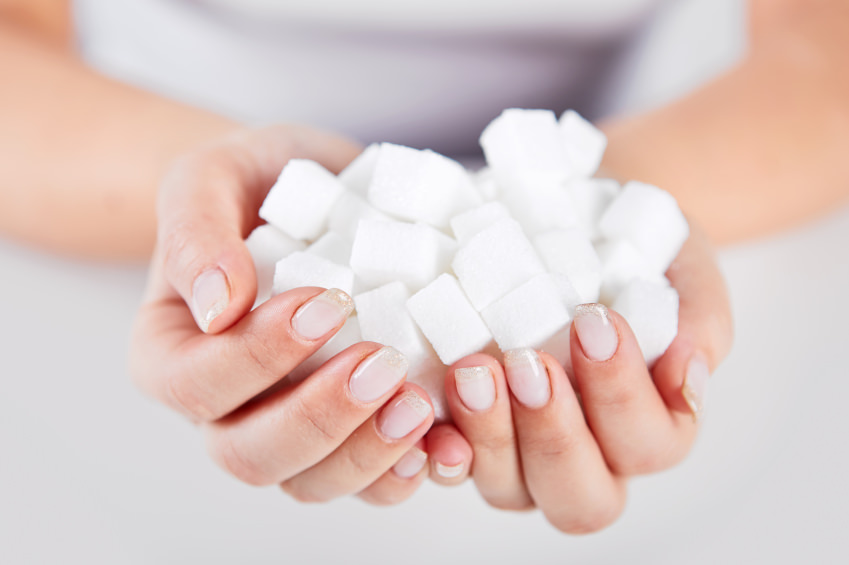 Why is that? And should you also?

Sugar comes in many forms. The most simplest form of sugar are monosaccharides, two which you might be familiar with are glucose and fructose. These too combined make up a dissacharide called sucrose, which we find on our table and what we think of as ‘sugar’.

Intrinsic sugar is the sugar which is found innately in food. In fruits, milk and sweet vegetables. Extrinsic sugars and the sugars which are added to our food, most commonly sucrose, during preparation or processing of the food.

It is the extrinsic sugars which are the ones we need to avoid as they supply kilojoules without any other valuable nutrients. They are energy rich and nutrient poor. Extrinsic sugars are in many foods like cakes, soft drinks, pastries, chocolates, confectionery and desserts.

Sugar is blamed for quite a few things, hyperactivity, acne, blood pressure and a whole host more. The two things WHICH ARE related to sugar is tooth decay and in over consumption, it can lead to obesity through excess kilojoule consumption. Although note, sugar itself does not lead to obesity.

So should I eat brown sugar instead? Is that better for me?

Sorry, but no. All sugar has the same amount of kilojoules per cup. Raw sugar use to be less processed, but these days it is white sugar coated in molasses to give it its brown colour.

Fructose is what is found naturally in fruit. Especially in America they process corn in a way to obtain high fructose corn syrup. This has been blamed for many health issues within America. It is used as it is cheap and very sweet without the need to use as much standard sugar.

Of course like any sugar, anything abused or not used in moderation is not good for your health. Therefore substituting fructose for all sugar is not the ideal solution. It is better to reduce your total sugar intake in general.

So why do we use fructose in the Healthy Mummy Smoothie mix?

Fructose does taste naturally sweeter then sucrose or glucose so it is a way to add less sugar, retain the sweetness and reduce the kilojoules or calories to your intake.This makes our product low in sugar. We do not use high fructose corn syrup to do this.

As our Healthy Mummy Smoothie contains a small amount of fructose (3g per 30g serve) we thought we would further address the debate on fructose.

There are a number of articles and various opinions on the internet as well as books which create a real fear factor around fructose so much so that some people are now scared to even eat fruit as it contains fructose.

All of these articles and books talk of the devastating effect fructose has on the metabolic system and all of the facts and research discussed in the articles (although rarely cited) are from a study done by Robert Lustig where rats were fed 60% (a huge amount!) of their diet from fructose and then the effects this had were documented. The effect on the rats’ metabolism was devastating but a rat’s metabolic system is very different to a human – and this is why so many nutritionists do not support the mass attack on fructose – when consumed as part of a healthy and balanced diet.

Some of these articles do make it clear that it is only large amounts of fructose which is thought to cause health issues, and when consumed on a moderate basis they do not believe it to be an issue – but many omit this fact hence why so many people have become fearful of fructose found in natural foods – i.e fruits and vegetables.

Dr Chris Kresser, an independent researcher and Doctor, who has independently researched the fructose debate says:

“Dr. Lustig argues that, when compared to glucose, fructose is uniquely fattening. He claims that fructose is the most efficient substrate for de novo lipogenesis (DNL), which is the process by which the liver converts carbohydrates to fat.

But in humans on an isocaloric diet (without excess calories), de novo lipogenesis falls into the range of 10 to 20 percent. The conversion of carbohydrate is less efficient in humans than it is in mice.

The research in this area is robust and uncontroversial. Nearly 50 controlled feeding studies have been performed on various aspects of cardiometabolic control. Most investigators working in this field believe that DNL in humans is negligible in response to fructose, and doesn’t comprise a significant source of dietary calories.

There’s another problem with extrapolating the animal evidence to humans in this case. The mice in the studies Lustig cites are eating huge amounts of fructose: up to 60 percent of total calories. You’d have to drink more than four 44 ounce Super Big Gulps a day to get that much fructose. Ain’t gonna happen.

Dr Chris also discussed all the clains on fructose causing weight gain and other issues here and it is a great read.

As mentioned above, one of the overriding messages when researching the Fructose debate (that in some author’s work is clear and others isn’t mentioned) is that fructose is only considered to be an issue when it is consumed in large amounts – i.e over 10% of the diet (approx 49g per day). And in the US for example where it is an issue people are consuming upwards of 72g a day. Many nutritionists and health advocates recommend consuming less than 50g a day – the anti sugar group typically tend to recommend consuming under 15g per day.

Please also be aware that many people have medical conditions where no sugar can be consumed at all – or the ceasing of consuming sugar has had extremely positive results on certain diseases – If you are ever concerned you should always consult a nutritionist who can give you a one on one consultation.

The issue is also how it is being consumed. For example a small bowl of tomatoes gives you approximately 2.5g of fructose whereas a regular can of soda can give you approximately 23g of fructose and a super sized soda from a take out venue can give you more than 60g. This is where the fructose consumption becomes an issue if the person is regularly consuming vast amounts of soft drinks and sweets/processed foods high in sugar.

There is no evidence that fructose in normal amounts consumed via a healthy diet is bad for humans, but if you have excess amounts (over 70g a day) it is likely to cause a sugar overload which may have negative side effects.

However, we cannot stress enough how that there are huge benefits to reduce your and your family’s sugar intake and eating a diet low in added sugars is crucial to having a healthy body – so try and reduce added sugar in your diet and be aware of hidden sugars in processed foods.

What about artificial sweeteners?

What are some natural sweeteners?

There are some great natural sweeteners on the market.

One which is popular and abundant in Australian supermarkets is a brand called Natvia. This is a combination of Stevia (a plant) and Erythritol which are two naturally occurring substances which combined make a great, ‘sugar’ replacement option without the calories.

You can try it in your baked goods, coffee or tea and it will reduce your calorie intake by 95%. Getting your sweetness when cooking requires a few attempts as it is a different flavour.

Check out some of our recipes on our site which have natural sweeteners used.

If you are ready to lose weight then The Healthy Mummy plans offer a healthy and safe exercise and diet routine that are safe if you are breastfeeding.

Maya Pinn is a mum-of-two and she has lost over 25kg by following the 28 Day Weight Loss Challenge!
END_OF_DOCUMENT_TOKEN_TO_BE_REPLACED

Not only has this amazing mum Amanda Grace lost 36kg in 10 months, she's also saved $5,000 and used that towards a deposit for a…
END_OF_DOCUMENT_TOKEN_TO_BE_REPLACED

Louise has not only lost 36kg after signing up to the 28 Day Weight Loss Challenge, she's saved heaps of money with her new lifestyle!
END_OF_DOCUMENT_TOKEN_TO_BE_REPLACED

A new ‘sexercise’ calculator has revealed which sex positions are most likely to take inches off your waistline!
END_OF_DOCUMENT_TOKEN_TO_BE_REPLACED

Em has lost 40kg and she hasn’t given up sausage rolls or ice-cream!

Em Tran is a mum-of-three and she has lost over 40kg by following the 28 Day Weight Loss Challenge. Here's how she lost the baby…
END_OF_DOCUMENT_TOKEN_TO_BE_REPLACED