Previous article
Weight Loss › 50% of mums reveal they throw groceries out EACH WEEK!
Next article

Did you know that one in five bags of groceries end up in the bin?!

In light of our February 28 Day Weight Loss Challenge – which is all about meal prepping, time saving and saving money – we surveyed over 300 mums in our community to find out more about their shopping and meal prep patterns. It turns out that ONLY 19 per cent of the mums in the survey admitted to meal prepping each week – with those who don’t prep revealing they have a lot of food wastage each week.

In fact, we were alarmed to hear that nearly HALF of mums surveyed (45 per cent) admitted to throwing out fresh food from their freezer and fridge EACH WEEK! With 37 per cent of mums revealing they spend up to $150 a week on groceries – that’s around $75 of food being thrown away on average. One of the biggest advantages of meal prepping and making healthy food for your family is the REDUCTION in the amount of wasted food, as well it saving you time and money.

With the majority of mums in the survey (37 per cent) admitting to spending between $125 and $150 a week on groceries – that’s a LOT of money being thrown down the drain! 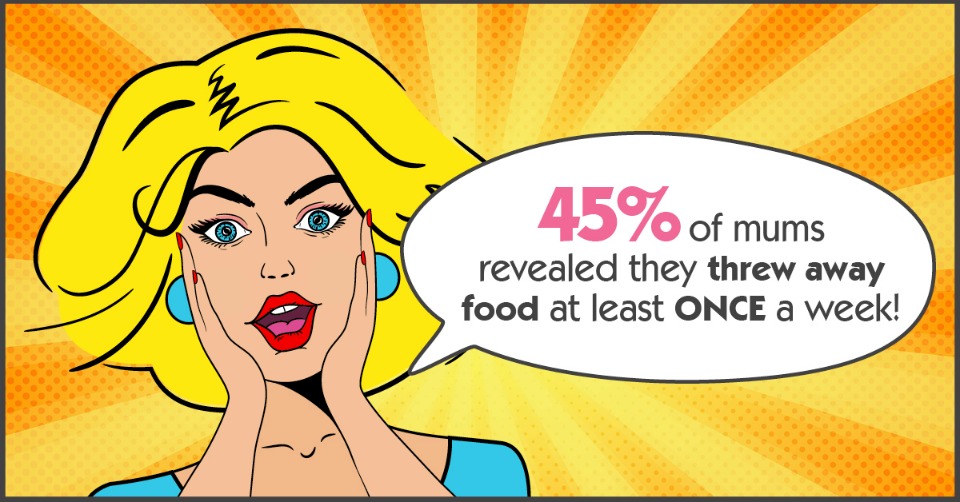 45 per cent of mums revealed they threw away food at least ONCE a week! Of the women surveyed, ONLY 19 per cent say they make a batch of meals each week!

34 per cent admit to having meal prepped once or twice before, while 22 per cent want to do it more regularly, 14 per cent are not sure where to start and 29 per cent have NEVER tried to meal prep.

What puts mums off meal prepping? 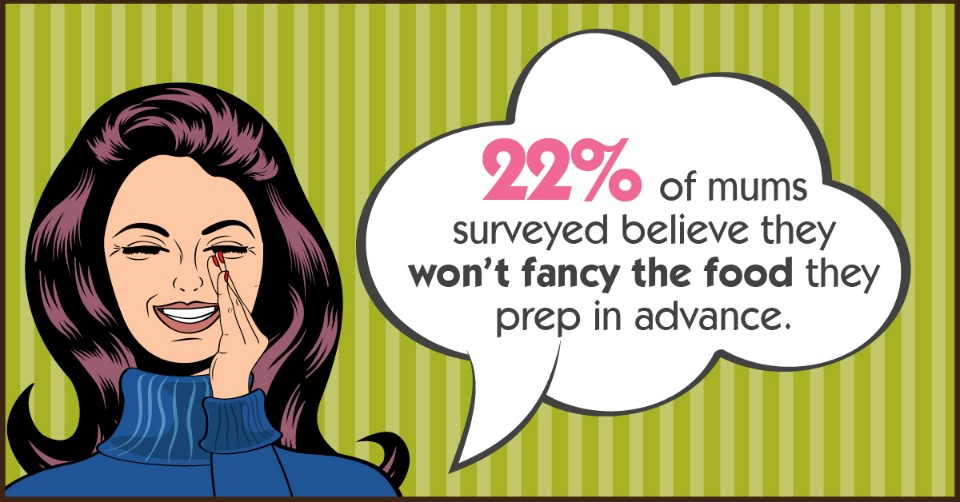 But while it seems like the easy answer is for mums to jump on the meal prepping bandwagon, many have reservations.

36 per cent are concerned about the cost of buying staple ingredients for their pantry, 22 per cent believe they won’t fancy the food they prep in advance.

30 per cent don’t believe the have the time and 9 per cent admit they don’t enjoy cooking.

Interestingly, 55 per cent of mums in the survey reveal they always check their pantry to see what ingredients they have while shopping and 44 per cent say they prefer cooking or meal prepping with a partner or friend.

Time of day to cook

47 per cent of mums surveyed say they have more energy to cook in the morning, while 28 per cent cook at lunch time, 11 per cent like to make meals in the evening and 12 per cent prep meals in the night time after everyone has gone to bed.

Time in the kitchen 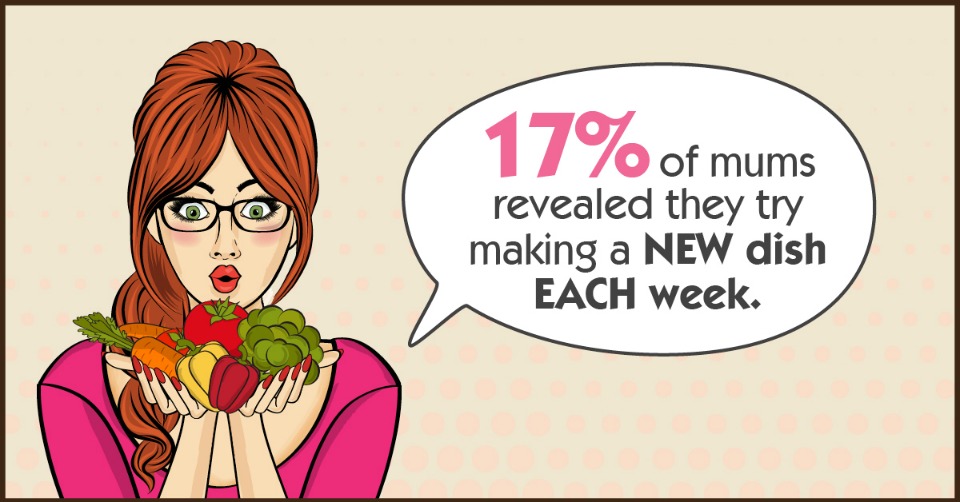 As meal prep requires time, it’s interesting to know that the majority of mums (48 per cent of mums) have spend three to four hours in the kitchen at a time.

The most amount of time mums spend time in the kitchen: 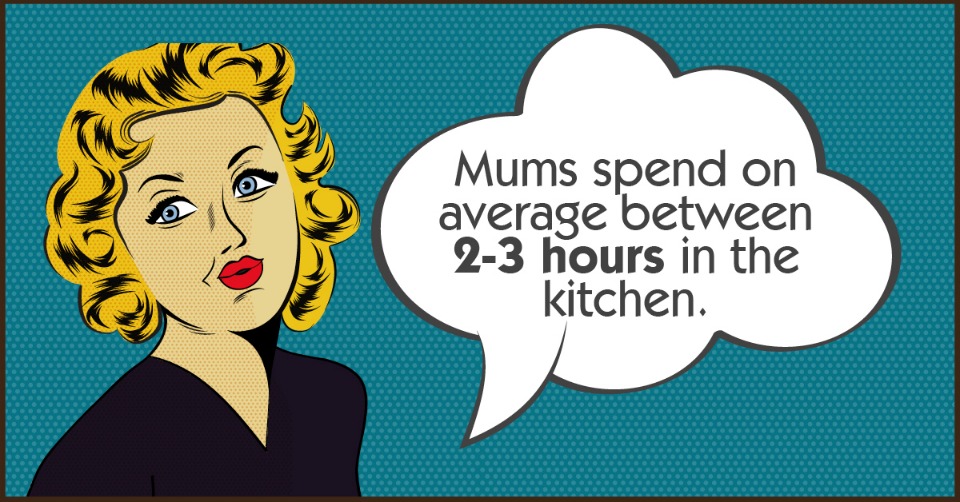 How much mums spend on groceries per week:

“I was shocked to learn that so many of our mums admitted to not only throwing food out, but are doing it every week,” says Healthy Mummy founder Rhian Allen.

“And with the majority of households spending up to $150 on groceries each week – most of which is being thrown out – no wonder so many mums say they feel they have no money left over for themselves each week, they are literally throwing money in the bin!

“The Healthy Mummy’s 28 Day Weight Loss Challenge helps mums not only learn how to meal prep and make a batch of meals for the week that can be frozen to avoid any wastage, but our customised app also helps mums plan their meals using the ingredients in their pantry and fridge. This is hugely helping mums save their money and cut down on grocery costs.” 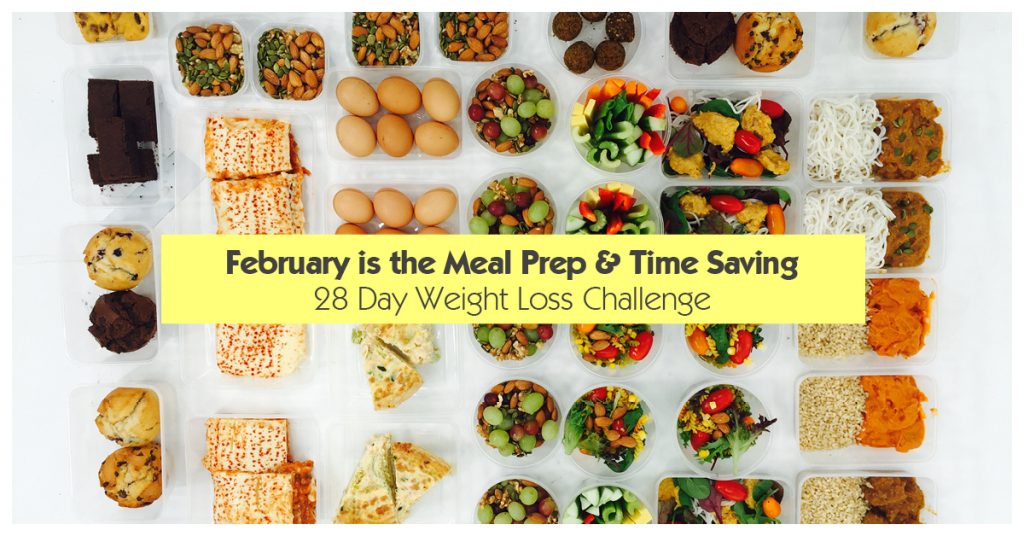 Are you wanting to shift the baby weight and blast tummy fat? Then join our 28 Day Weight Loss Challenge!

Our Challenge is designed by mums for MUMS to help them lose weight through healthy eating plans and exercise.

Each month our 28 Day Weight Loss Challenge is themed, targeting things like reducing sugar, budget recipes, meals for fussy eaters, recipes with 5 ingredients or less, and many more.

You can find out the theme of this month’s challenge HERE.

The next 28 Day Weight Loss Challenge starting 23rd May 2022 is dedicated to 28 Days of Immunity Boosting recipes on a budget!
END_OF_DOCUMENT_TOKEN_TO_BE_REPLACED

Maya Pinn is a mum-of-two and she has lost over 25kg by following the 28 Day Weight Loss Challenge!
END_OF_DOCUMENT_TOKEN_TO_BE_REPLACED

Not only has this amazing mum Amanda Grace lost 36kg in 10 months, she's also saved $5,000 and used that towards a deposit for a…
END_OF_DOCUMENT_TOKEN_TO_BE_REPLACED

Louise has not only lost 36kg after signing up to the 28 Day Weight Loss Challenge, she's saved heaps of money with her new lifestyle!
END_OF_DOCUMENT_TOKEN_TO_BE_REPLACED

A new ‘sexercise’ calculator has revealed which sex positions are most likely to take inches off your waistline!
END_OF_DOCUMENT_TOKEN_TO_BE_REPLACED