Pregnancy is supposed to be a joyful journey, but for Caitlin Ryan is was far from blissful, as she suffered with severe morning sickness, also known as hyperemisis gravidarum, throughout.

And while she managed to keep it at bay mostly with medication, she still ended up paying over $2,000 out of pocket!

Suffering with sickness during pregnancy

Caitlin suffered with hyperemisis gravidarum throughout the duration of her entire first pregnancy, and she says she knew it was a big decision to try for another baby, as she would most likely have the sickness again.

When Caitlin was pregnant for the second time, she found out she was actually carrying twins at the 12 week scan.

“I was definitely sicker the first 16 weeks or so than when I was with my first singleton pregnancy, but I had read that women that suffer from HG often get it worse in subsequent pregnancies, so I just thought this was what had happened,” she tells The Healthy Mummy.

Zofran or Ondansetron is what’s prescribed by doctors to treat severe sickness during pregnancy, but it is expensive and it’s not listed on the government subsided Pharmaceutical Benefits Scheme (PBS).

“During my first pregnancy I had tried multiple medications – Maxalon, Stematil, vitamin B6, Restart, Ondansetron and Zantac.

“But the second time the only things that seemed to make a slight difference were Ondansetron, Restart and Zantac, so I only took those the next time.” 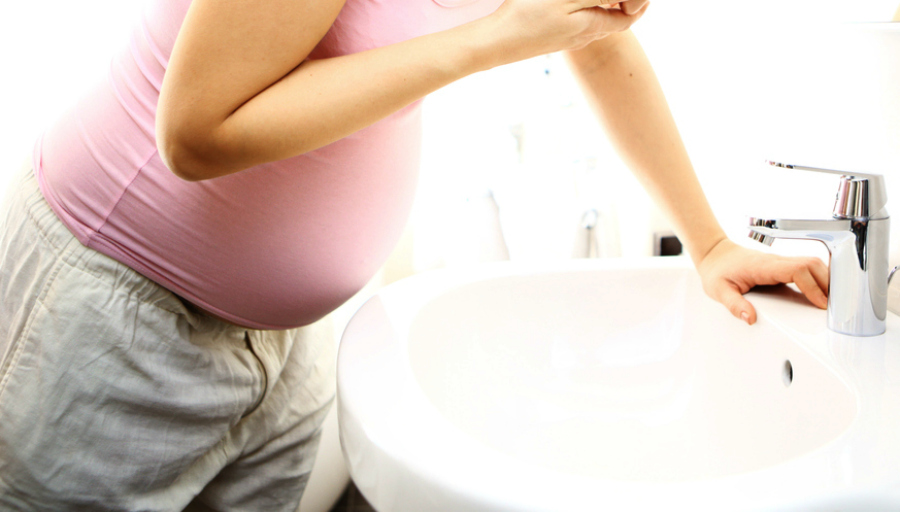 Caitlin says she also tried alternative options like ginger, health tonics, acupressure, swimming, special music and as well as going to see an osteopath – but nothing helped curbed the sickness.

The sickness was so severe that Caitlin was hospitalised twice for fluids and twice for iron transfusions.

“I hated going to the hospital, so tried to avoid it as much as possible,” she says. “The entire pregnancies both times – from five weeks until delivery I had sickness. It was definitely worse until around 16 weeks both times but the 24/7 nausea and daily vomiting lasted the whole pregnancy.

“The only time I got any relief was when I was asleep and it was hard to see as I felt so sick. Both times it took until about a week post birth for the nausea to be completely gone and my appetite to return.”

Trying to make a change

Caitlin reveals the medication she spent on treating her sickness cost her over $2,000 per pregnancy!

“When you include the other medications, it would probably bring the total up to $2,000 per pregnancy!”

Pregnancy can be expensive enough paying for scans, maternity clothes, buying things for the baby – so these extra costs aren’t ideal.

This is why Caitlin is trying to raise awareness for the condition and is petitioning for these medications to be on the Pharmaceutical Benefits Scheme (PBS).

“I want to raise awareness for the condition of hyperemisis gravidarum (HG), as it’s nothing like pregnancy sickness,” says Caitlin.

“Before I had it I had no idea that it existed and it’s impossible to imagine what it’s like unless you have been through it.

“I’m wanting to support a petition to get Ondansetron on the PBS for HG as it is is expensive and it’s unfair some women that need to simply can’t afford it.”

Caitlin says this pregnancy she decided to save her medication packets in the third trimester and take a pic of it with her twins to help raise awareness.

“I have had support from family and friends who have seen how unwell I had been during my pregnancies,” she says.

“The picture I posted received lots of negative comments from other women on an online forum it was posted on, but obviously they haven’t had to experience how horrendous HG is.”

Caitlin says for her the next steps are to move on with her life post HG and enjoy her three gorgeous kids.

“People say it will be a distant memory soon, but I will never forget how awful HG was,” she adds.

If you want to sign the petition to have ondansetron covered by the PBS, read more here Change.org.

If you are suffering from morning sickness and find eating food difficult – our smoothie is a great way to nourish your body with a easy to drink smoothie- it also contains ginger.

Where the placenta comes from and 10 incredible facts about the placenta to leave you in awe.
END_OF_DOCUMENT_TOKEN_TO_BE_REPLACED

This healthy and delicious version of a Mexican Style Lasagne is ideal when following the 28 Day Weight Loss Challenge. It’s budget-friendly too at just $1.60…
END_OF_DOCUMENT_TOKEN_TO_BE_REPLACED

The Healthy Mummy is committed to supporting and empowering mums of all ages and in different stages of their life. That includes the particularly special…
END_OF_DOCUMENT_TOKEN_TO_BE_REPLACED

Whilst Covid 19 has caused various disruptions to health services in the past year, it has also led to a potentially positive change for pregnant…
END_OF_DOCUMENT_TOKEN_TO_BE_REPLACED