A mother has found the perfect way to document her daughters growing up with a series of photos that are not only adorable, but timeless (even if childhood is not).

You’ve got to see why mum-of-two Dominique’s photos are the latest images to take Instagram by storm!

It happens to the best of us. You get dressed in the morning only to discover that your children have unintentionally chosen very similar outfits to yours.

For Dominique, it was this simple wardrobe incident that gave her an idea on how she could easily document her daughters growing up in creative and memorable way.

After Dominique accidentally dressed herself and her eldest daughter, Amelia in striped shirts, her youngest daughter, Penny, also emerged from the bedroom in a similar shirt.

Dominique decided to take this idea and run with it, staging weekly mummy-daughters photo shoots, complete with matching clothing, props and smiles.

The trio don an assortment of outfits, from cosy flannel shirts to cute coveralls, and are often holding props, including cameras, balloons and icy poles. Some of the photos are also staged from behind to showcase similar hairstyles on the three stunning ladies.

Many of the photos also signify a special time of the year, such as back to school, Halloween and New Year’s Eve.

Three of a Kind

Using the Instagram hashtag #allthatisthree, Dominique now has an array of adorable photos of her daughters, Amelia, 10 and Penny, three, all of which are simple, elegant and creative. They provide Dominique with a unique way to capture these fleeting moments in childhood.

Dominique, who is a capsule wardrobe coach and blogger at All That Is She, admits that it’s quite amazing to look back at the photos and see how much they have grown in only six short months.

In every photo the three girls are clearly having fun and it’s this playful mother-daughter relationship that Dominique believes sits so well with her readers.

“The reaction has always been incredibly positive; people seem to love seeing the photos just as much as we love to create them,” Dominique told The Healthy Mummy.

Due to the popularity of her photographs, Dominique’s Instagram page is followed by over 80,000 people and most of her images are liked by 16,000 people or more.

The weekly photo shoots are also a great way for Dominique to bond with her girls, who, at this stage, both love the photo sessions. But, Dominique knows that there will come a time when her girls will grow out of the photo shoots.

“When the time comes that either of them stops enjoying it, then I’ll stop. Hopefully, I’ve got a few more months, maybe even years, of them to look forward to, though.”

We absolutely adore Dominique’s stunning photo series and love the idea (have a look at our favs photos below)!

Would you consider staging something similar with your kids?

For more incredible pics – check out these Amazing Photos Show The Crowning Glory Of Birth. 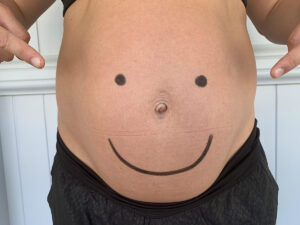 What to expect if you are pregnant this Christmas 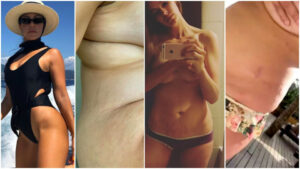 8 celebrity mums who are PROUD to show off their stretch marks! 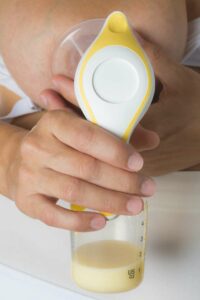