Parents are being told to remove the cords on their children’s school hats, after an Adelaide girl was strangled in a frightening playground incident. It’s prompted a call for a nation-wide ban on the popular hats, as more parents come forward with similar stories. Six-year-old Marley Oster was saved by a fast-acting student who managed to free the petrified girl, after her hat cord got stuck in a slide.

The incident has triggered a ‘hazard alert’ from South Australia’s Education Department, calling for all cords to be removed from hats worn by students.

Strangled On A Schoolyard Slide

The terrifying accident unfolded after Marley’s hat cord became stuck in a section of a spiral slide at her Adelaide public primary school last week, leaving the girl gasping for air. Her mum Gail told The Healthy Mummy that eight-year-old student Madison Fleming saw Marley was in distress, and sprung into action.

“Madison slowly crawled down there (the slide) without falling on Marley, sat there and just persisted to get this cord out. She said it took a really long time to get it out, it wouldn’t come out. Eventually she got Marley free.”

Gail says she’s now plagued by ‘what-ifs‘, with doctors telling her that the incident could have been fatal if her daughter wasn’t rescued, or another child had come down the slide.

“I didn’t realise the severity of the injuries, the internal injuries until the doctor said to me, ‘Do you realise that her windpipe was not far from collapsing.’ Once your windpipe collapses if you don’t get appropriate medical care, then you can’t get air through, and then your brain starts to die.”

Not An Isolated Incident

The alarming incident has sparked a call for an Australia-wide ban on school hats with cords. Gail says she’s been inundated with similar stories from other parents, and today a meeting was held with SA Education Minister Susan Close to push the issue.

“It’s mind-blowing. It’s all around Australia, it’s Tasmania, Victoria, Queensland, Perth. I just didn’t realise that it was such a major thing that’s been happening. It’s been happening for many years,” Gail told The Healthy Mummy.

“I want people to be aware that just because a school has items of clothing from the school uniform shop that they expect you to buy – ask questions. If you think that something’s not right, don’t buy it.”

In a statement to The Healthy Mummy, SA Education Department’s Laura Schonfeldt said the state’s schools have been advised to take the following steps: 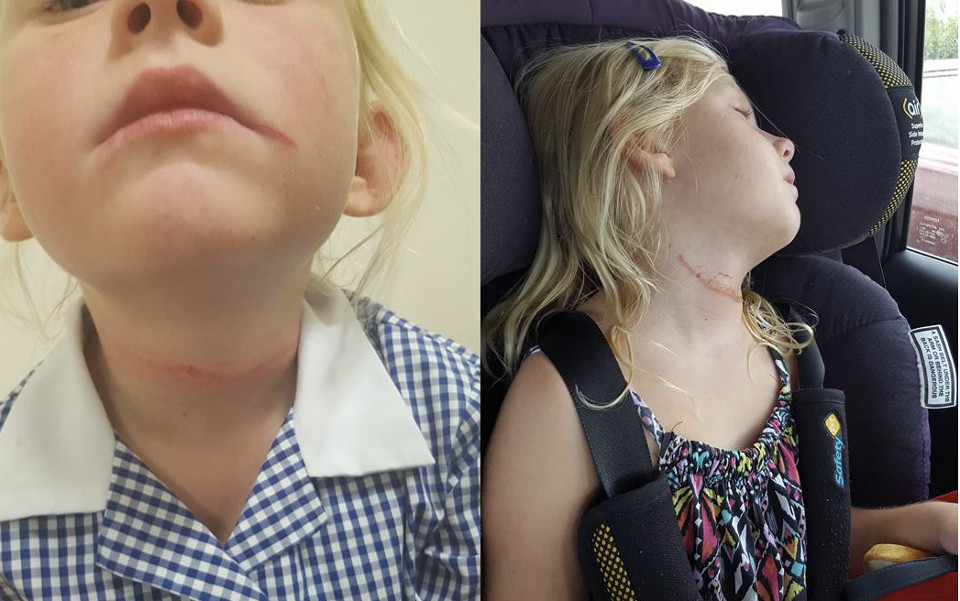 A five-year-old Toowomba girl was left hanging by her neck earlier this month, after she jumped from a playground climbing net and her hat became stuck. The cord snapped after a few seconds, but she was still left with visible rope burn on her neck.

In September last year a Western Australian kinder student was almost hanged after the cord on his hat become caught on a climbing frame.

Grab these ten great value foods to give your pantry, and your meals, a quick and nutritious boost! Plus 10 recipes using budget pantry staples.
END_OF_DOCUMENT_TOKEN_TO_BE_REPLACED

The new breakthrough study has identified a biochemical marker that could help detect babies more at risk of SIDS, while they are alive.
END_OF_DOCUMENT_TOKEN_TO_BE_REPLACED

We are so excited Fiona Falkiner’s, The Biggest Loser’s former host, health and body transformation. She is looking so healthy, strong and confident and we…
END_OF_DOCUMENT_TOKEN_TO_BE_REPLACED