We never knew how hilarious Ryan Reynolds was. I mean, we knew he had a little humour in him, but since becoming a father (and getting onto Twitter), he’s really stepped it up a notch. 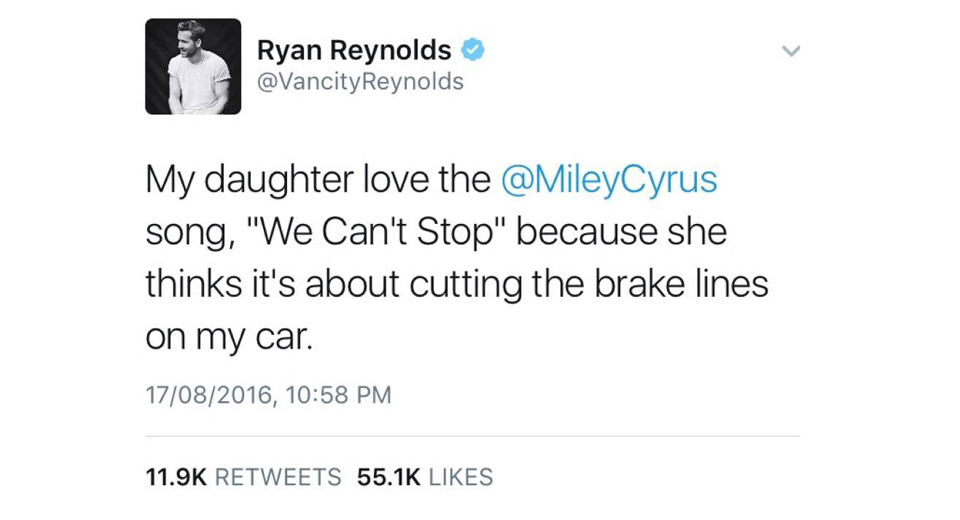 Do not, under any circumstances, use Ryan Reynolds as your ‘go to’ for parenting advice.

Damn it's hard letting your infant daughter go somewhere alone for the first time. I was a total mess dropping her off at Burning Man.

I mean, who comes up with this stuff? Smart and absolutely hilarious!

I feel like I need to make it clear that he’s obviously not serious.

On our 6am walk, my daughter asked where the moon goes each morning. I let her know it's in heaven, visiting daddy's freedom.

This guy definitely has a hold on the whole ‘make parenting fun’ situation. Even though he and wife Blake Lively are extremely private about their family life, he loves sharing these little gems.

Tinder isn't a babysitting app. Apologies to Crystal and Janine for the misunderstanding.

This one I find incredibly hilarious, mainly because he’s used my name. PLUS, he tweeted it ON MY BIRTHDAY! How did he know??

Ask your doctor if you qualify for an extension. A 4th, possibly even 5th trimester can be very peaceful for the father. Congrats. https://t.co/CTdyI66in3

He even finds time, in his busy schedule, to hilariously reply to fans.

Ryan and Blake have a daughter, James, and recently welcomed their second child to the world. There are no details yet about the new bub, though we can’t wait to hear both the name and gender. And also some more hilarious tweets. Plus, his Instagram account is pretty funny too.

Best. Birthday. Everrrrr. Courtesy of my wife, buddy, and international spy, @blakelively. With huge thanks to my favorite restaurant in NYC, @_o_ya_ — and a special shout out to our children for not ruining everything like they planned.

Keep them coming, Ryan. We love a good giggle.

Make sure to browse our archives for more reliable parenting advice.

Millions of Australian households are set to be slugged by soaring electricity costs - Get these great budgeting tips.
END_OF_DOCUMENT_TOKEN_TO_BE_REPLACED

As a new study has found that parents are getting so much less sleep than anyone ever realised!
END_OF_DOCUMENT_TOKEN_TO_BE_REPLACED

Every week The Healthy Mummy runs different competitions with LOADS of fabulous prizes to be won! See if you are one of the lucky winners!
END_OF_DOCUMENT_TOKEN_TO_BE_REPLACED