Previous article
Lifestyle › TOO CUTE – Dad Recreates Beauty And The Beast Scenes With His Daughter!
Next article

If anyone deserves to be put up for an award for ‘Best Dad in the WHOLE WIDE WORLD’, it’s this dad, who recreated cute Beauty and the Beast scenes with his daughter for a Valentine’s Day pressie for her. Awe! 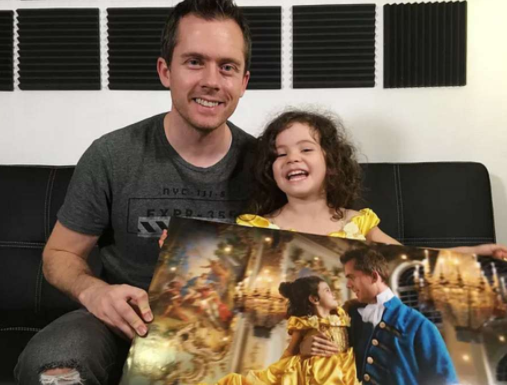 “My daughter inspires me to do these photoshoots. Also anything Disney is so magical and amazing,” Josh tells The Healthy Mummy.

Photographer Josh Rossi wanted to give his daughter Nellee a “gift that would last forever”.

So, the doting Utah-based dad travelled Europe for a week collecting photos with which to create beautiful backdrops for the shoot.

“I shot a total of three castles, five cities and randomly stopped at small provincial villages along the way to create the images,” he wrote in a post on his blog Fulltime Photographer.

Nellee running away from the beast. I found a perfect clock inside one of the castles to use as Cogsworth! It dates back to around the 1700’s.

“For me the trip to Europe was a token of my love for my daughter.”

‘Something My Daughter Would Have Forever’

Josh then transformed his three-year-old into a miniature Belle, dressing her in blue and yellow dresses similar to the iconic ones in the 1991 animation, and then shot pics of her against the stunning backdrops.

“The story of Beauty and The Beast has such an amazing message of true love and being accepted that I wanted to recreate the scenes with my daughter,” he wrote.

“I also wanted to create something my daughter would have forever that showed the fun relationship and the love I have for her.”

Alright guys it’s here! My Valentine’s gift to my daughter Nellee! Thanks to @elladynae for the awesome dresses! Click the link in my bio for the full article… #beautyandthebeast

And Josh even donned a Beast costume for an adorable snap of him and Nellee dancing together in the ball room.

“I realised that one of the most important things we can do as parents is spent time with our kids and play a little,” Josh adds.

“Nellee loved the print I gave her so much! She kept jumping up and down and kept smiling. She also couldn’t stop looking at the full series of images,” Josh tells us.

“Right after I gave her the print this morning she started singing the songs from the movie. The whole process took about one month. A week to hand make the dresses which Ella Dynae did. They are amazing! 1-2 weeks to travel to Europe to get the shots then one week to edit.

“My favourite part was being able to create something WITH my daughter. Something we both love to do. Usually we are just playing games our kids like. This time we play a game we both truly love which is taking magical pictures together.”

It’s not the first time Josh has done something like this for Nellee!

He recently recreated a cute Wonder Woman shoot for the tot, and used some incredible imagery to take pictures of her against.

Alright guys here is the project I have been working on for the last 2 months! I fulfilled my daughters dream of becoming Wonder Woman ha! Click the link in bio to check out the article and how the images were created!

This is the image that took 5 people to hold Nellee. It took about 50 shots to get it right

Would anyone be interested in a photoshop tutorial of this series? And if so, which image?

Awww! What an amazing thing to do!

Meanwhile, this father of four daughters brings out hilarity in raising girls!

As a new study has found that parents are getting so much less sleep than anyone ever realised!
END_OF_DOCUMENT_TOKEN_TO_BE_REPLACED

Every week The Healthy Mummy runs different competitions with LOADS of fabulous prizes to be won! See if you are one of the lucky winners!
END_OF_DOCUMENT_TOKEN_TO_BE_REPLACED

A woman was shocked to discover that her mother-in-law wanted to throw a 'grandma shower' ahead of welcoming her first grandchild.
END_OF_DOCUMENT_TOKEN_TO_BE_REPLACED